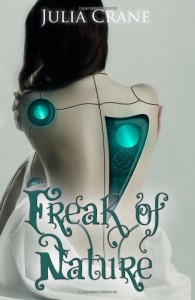 Let me just start off by saying I am so excited that there will be a second book!  It is called Fractured Innocence.  The cover is badass!  There's no release date on Goodreads but according to the author Julia Crane it should be out sometime in December.  I loved Freak of Nature.  I was originally drawn to this book because of the cover art.  It's so beautiful I had to read it.  When I saw it available on NetGalley to review I jumped at the chance.  It didn't disappoint me at all.

The story centers on Kaitlyn.  She is basically the first cyborg.  She doesn't remember who she was before she was a cyborg because they took away her memories.  They were supposed to take away her emotions as well but when Lucas is around she has strange feelings.  It's so funny how she tries to figure out her reactions to things such as 'Kaitlyn felt like she couldn't breathe.  That was ridiculous; there was nothing blocking her airways.'  It was interesting to see human emotions and reactions from a computer point of view.  Always analyzing everything.

Lucas is a young and brilliant scientist who wrote the coding for Kaitlyn.  They spend a lot of time together and he has found himself attracted to her.  Which upsets him greatly because he doesn't know that Kaitlyn can feel so he thinks he's attracted to basically a robot with a female body.  By the time he does discover that she can feel it's too late.  She is to be sold to the government as an assassin.  The only other character that's in Freak of Nature enough to mention is Quess.  She is a thirteen year old girl who's grandfather, Professor Adams, works on Kaitlyn's team.  Quess is really smart for her age and realizes that Kaitlyn can feel.  They spend a lot of time together with Quess explaining things to Kaitlyn like what "roll your eyes" means.  I really enjoyed their relationship and their banter.  It was very entertaining to have this little girl try to explain basic things to an adult robot.

Altogether this was a great story.  It had a lot of twists and turns that I hadn't expected.  I actually liked it more than I expected to.  Don't be turned away by the young adult tag... there's really nothing young adult to it.  It's set in a laboratory environment and Lucas is 21.  I still dubbed it as young adult myself because changing it would give away part of the story.  Other than that all I can say is it's worth the read... I think I read it in record time!  I couldn't put this book down once I started it.

"How could a kiss take her breath away?  The effect he had on her wasn't rational, but she gave in to it anyway.  He made her feel alive."

"She wasn't sure why they were so impressed.  She was programmed to be this way."

"'Caution' flashed on her internal screen.  Thanks computers, she thought, slightly annoyed.  I'm well aware the situation is problematic."

"Why can't I have this fancy map already installed in me and be able to ask Siri to search info for me on the all-knowing Google?"