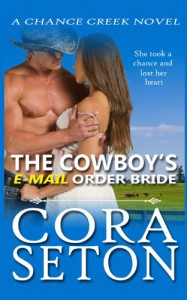 I decided to read this book after I'd already read The Cowgirl Ropes a Billionaire which is actually book 4 of the Cowboy's of Chance Creek series. The Cowboy's E-mail Order Bride is book 1 of the series. This was a cute story. I liked Ethan and Autumn. It was a quick and easy read. Ethan's sister Claire was fairly annoying and I'm not sure if I want to read the next book since it's about her. It also drove me nuts that the person doing the most harm to their relationship, Lacey, had my name. I swear I cringed every time that I read it. If there is or will be a story with Lacey I won't be able to read it for that reason. I can't imagine how annoying it must be for people who's names are in books often.

I liked Ethan's friends and think that the whole set-up with the Youtube video was hilarious. Cora Seton is very talented at thinking of unusual ways to get people to meet. I'm looking forward to the rest of the series to find out how Ethan's friends do. Ethan is a good guy, a hometown cowboy. Autumn has some issues in her past regarding her father that make it hard for her to trust. Her mother really messed her up if you ask me. I like Autumn, at first I wasn't sure about her because of the snarky magazine reporter vibe she was giving off. I've read books where I have no idea what the guy sees in the girl and was worried that this would be like that but it all turned out good.

Autumn falls into life on the ranch like a fish to water. I liked how the townspeople treated her (except Lacey) and how she treated them. Ethan is going through some major difficulties after his parents deaths and she is right there with him not only supporting him but helping him through it. Their relationship is very genuine and instantaneous. A little love at first sight with some added trepidation because they're both lying to the other about the reasons they're together. The lies pile up and things get pretty rocky. Everything ended out fine though. This was definitely a fun read and I look forward to more from Cora Seton. She has opened me up to yet another genre that I wouldn't normally read.